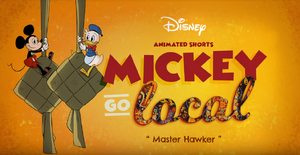 The series shares a name with Mickey Go Local, an event held in Singapore to coincide with Mickey's 90th anniversary. It is possible that the two events are part of a larger, Singaporean-based promotion.

Retrieved from "https://scrooge-mcduck.fandom.com/wiki/Mickey_Go_Local?oldid=33699"
Community content is available under CC-BY-SA unless otherwise noted.