This teenaged duck is the nephew of Scrooge McDuck's secretary, Emily Quackfaster, who once took him to Tomato Soup Land. She later mentioned this to her boss, which inspired his short-lived attempt to turn in a profit from his Money Bin's sheer existence by turning it into a theme park called “Bin World“. 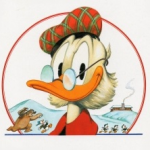