The Richest Duck in the World

Challenge of the Senior Junior Woodchucks
Moonvasion is the 24th and final episode of DuckTales 2017’s Season 2, a television cartoon episode. Written by Colleen Evanson alongside the usual crew, and directed by Jason Zurek and Tanner Johnson.

General Lunaris launches the Moonlander invasion of Earth, with the majority of his forces attacking Duckburg. While Della flees with the kids under the pretence of collecting allies from around the globe, Scrooge assembles a motley crew to try and retake the city. When Scrooge's best-laid plans prove fruitless, the Ducks must rely on close and distant family, friends dear or not-so-loyal… and on some former foes.

Moonvasion was broadcast on September the 12th, 2019.

Prior to release, Francisco Angones had teased that "one of the good guys" would die in the course of the special. No main cast member actually died in the film; three candidates exist whom Angones could have been referring to, with fraught debate in the fandom of which one was meant. They are Gyro Gearloose (or one of his clones), Hanks the Li'l Bulb, and Melon. 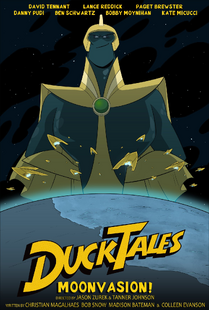