Mrs Duck is the elderly mother of Daisy Duck and therefore Otto Duck's wife. Almost deaf and not very bright, she appears to live with Otto in a Duckburg house. She may be none other than a sibling of Ludwig von Drake's.

Mrs Duck only appeared in 1954 in the cartoon Donald's Diary, and, as a cameo, in the 2009 comic The Danger Caves (where Daisy is shown to have a picture of her). Johannes A. Grote's Duck Family Tree also identifies the portrait of a blonde female duck seen in an as-yet-identified Carl Barks comic story as Mrs Duck.

According to the French Duck Family Tree, a sibling or half-sibling of Ludwig von Drake is one of Daisy Duck's parents. While it is most likely that this sibling was Daisy's father Otto Duck (who either changed his name to "Duck" to Americanize it, or is a half-brother of Ludwig, son of Ludwig's mother and a Mr Duck), it is also possible that it is Mrs Duck, whose maiden name would have been Von Drake. 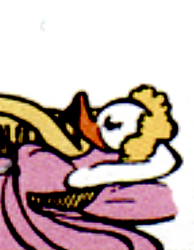 A young Mrs Duck as seen in Johannes A. Grote's Duck Family Tree.
Community content is available under CC-BY-SA unless otherwise noted.
Advertisement