Norway
An island in the Pacific

Olaf the Blue was a Viking explorer who sailed his ship first to Iceland, and later to the Coast of Labrador on the American continent, in 900 and 901 C.E.,[1] on the orders of the King of Scandinavia, Macduckssön. He made contact with the Peeweegahs, who knew him as "Blue Head", and strong-armed the mysterious tribe into letting them build a Viking colony which flourished for some years. In the end, however, Olaf decided to take to the sea agin, but, before he did so, he had the Peeweegahs give him a parting gift of some gold ore which he had forged into a Golden Helmet.[2]

Claiming ownership of the new realm he had discovered for himself, Olaf buried his Golden Helmet where he had reached land so as to prove that he had truly been there, in a secret location documented on a map which he hid in his Drakkar's hull.[1] Olaf somehow made his way to the Pacific Ocean, and he and his crew spent years lazing away on a paradise island, before they eventually made their mind to go home.[2] Olaf the Blue died in 920 in Norway, and his ship, depending on accounts, was either buried with him[1] or left adrift to eventually freeze into an iceberg in the Polar circle.[3]

Olaf the Blue was prominently mentioned throughout the 1952 story The Golden Helmet, by Carl Barks. A portrait of him was glimpsed for the first time in the 2004 Don Rosa tale The Black Knight Glorps Again, and seemingly used as reference when Olaf finally made a prominent appearance in the flesh in Donald the Viking Conqueror, a 2019 Italian prequel to The Golden Helmet which ties into another of Carl Barks's stories, Land of the Pygmy Indians.

His name is ostensibly an allusion to Erik the Red. 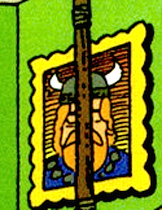 The portrait of Olaf the Blue created by Don Rosa in 2004. 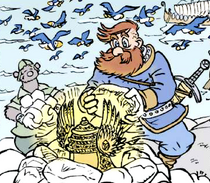 Olaf buries the Golden Helmet, as visualized by Francesco Guerrini in 2019.
Add a photo to this gallery

Retrieved from "https://scrooge-mcduck.fandom.com/wiki/Olaf_the_Blue?oldid=49771"
Community content is available under CC-BY-SA unless otherwise noted.