Origins was the sixth story of Kelly Green's Haunted Mansion Fancomics, being a one-panel comic panel written & drawn by Kelly Green. It features the Hitchhiking Ghosts Ezra, Phineas, and Gus — indeed, two of each.

The Hitchhiking Ghosts of 2012 meet their original selves all the way from the 1960's, and aren't too impressed.

This fancomic was released on March the 13th, 2012 on DeviantArt. 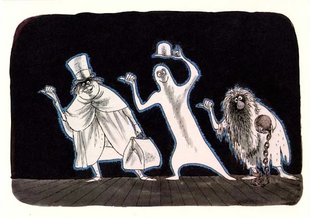 The original The Haunted Mansion concept sketch of the Hitchhikers which is referenced by Kelly's comic.
Community content is available under CC-BY-SA unless otherwise noted.
Advertisement