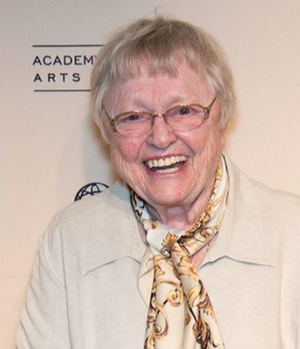 Patricia Ann Carroll (b. May the 5th, 1927), better known as Pat Carroll, is an American actress and voice actress.

A prolific actress, Pat Carroll's career stretches all the way to the 1950's, where she appeared on numerous sitcoms and sketch-comedy anthologies (winning an award for her work on Caesar's Hour). From the 1980's onwards, she launched into an equally fruitful career as a voice actress in animated programs, and has also received praise for stagework.

Pat Carroll's first and most famous Disney role is the sea witch Ursula, the main antagonist of The Little Mermaid, whom she has continued to voice in almost all her subsequent appearances, save on-stage in the musical version of the story. She also voiced Ursula's sister Morgana in The Little Mermaid II: Return to the Sea, so as to emphasize the similarity of the two characters.

In Chip 'n Dale: Rescue Rangers, she voiced the secondary character of Kookoo in the episode Gorilla My Dreams.

More recently, Carroll has voiced Old Lady Crowley in Tangled: The Series. She also voiced Madame Leota and a female Ghost Host during a live performance at Spooky Empire in 2014 and 2015, the recordings of which were the basis of the short film Leota Helps Out.

Retrieved from "https://scrooge-mcduck.fandom.com/wiki/Pat_Carroll?oldid=39411"
Community content is available under CC-BY-SA unless otherwise noted.