Penny the Elephant is an elephant buried in the Pet Cemetery of the Haunted Mansion in a crypt comically sculpted to resemble her; the epitaph suggests that she once belonged to one of the owners of the house. Her benevolent jade-like, translucent blue-green ghost has been known to materialize in several places outside the Mansion, not least of which an ice cream parlor.

Initially created for Disneyland Paris, the Penny the Elephant prop eventually made its debut in 1993 in Disneyland's Penny Arcade (from which it drew its name) before being displaced to the Gibson Girl Ice Cream Parlor. It was removed in 2012 and was sitting in storage, forgotten, when in 2016, it was decided to rationalize the translucent pachyderm as one of the Haunted Mansion's animal ghosts, with a new air vent being disguised as Penny's crypt; an especially-written epitaph was added in October of the same year identifying the elephant as Penny. In 2017, Penny was reintroduced as part of Tropical Imports in Adventureland.[1] 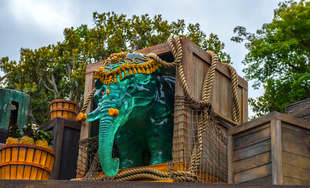 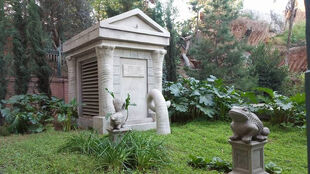 Penny's crypt in the Pet Cemetary in The Haunted Mansion. 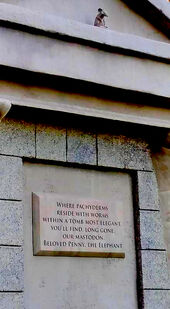 Penny's plaque. (This photo & previous one by Noah Korda on Facebook.)