The Trial of Donald Duck

Pierre stories
Pierre is a human man, or, according to other accounts, a dognose.

Hiding a bullying attitude and a hair-trigger temper beneath a veneer of outrageously-well-mannered swankiness, Pierre, of the café and restaurant Chez Pierre, was so offended when a frustrated Donald Duck tried to bring his own lunch and eat it at one of his tables that he attempted to charge Donald for his own food in revenge. Although Pierre more or less won the case against Donald after taking him to court, his sentence was ten days washing dishes for Pierre, and Pierre soon regretted his lawsuit very much, considering Donald's clumsiness.

Pierre appears in the 1948 cartoon The Trial of Donald Duck as a human. For the the comic adaptation of it, however, he was redesigned as an anthropomorphic dog. 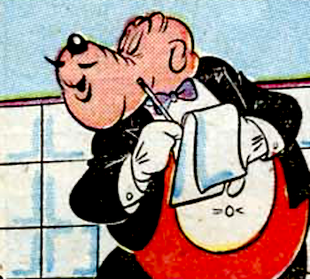 Pierre as seen in the comic.
Add a photo to this gallery
Retrieved from "https://scrooge-mcduck.fandom.com/wiki/Pierre?oldid=39791"
Community content is available under CC-BY-SA unless otherwise noted.