Professor Pintail is a multidisciplinarian scientist. When Donald Duck first encountered him in 1961, he was working as an archaeologist (whose specialty appears to be Pre-Columbian civilization) and the director of the Duckburg City Museum. Together, Pintail and Donald explored the Ixticl Pyramid, the only known Mayan pyramid with a bannister in the middle of its stairway.

Two years or so later, he had seemingly abandoned archeology to focus on astronomy; involved with the Duckburg Space Exploring Academy, he was good friends with Professor Hermit when he became lost in space in 1962. In 1963, he, alongside Doctor Drake and General McQuack, hired Donald Duck to go on a space mission to look for Hermit and ascertain whether he was still alive (which, as a matter of fact, he was).

The next year, Pintail and another fellow scientist dragged Ludwig von Drake out of bed to the Planetarium one night to get his expert opinion on a mysterious new celestial body (which turned out to be nothing but a dust speck), and he was also involved with the Duckburg Space Exploring Academy.

Professor Pintail first appeared in the 1961 story The Mysterious Pyramid. His physical appearance is very similar to that of Ludwig von Drake, who was created the very same year. He later appeared alongside Von Drake in the 1963 stories Beyond of The Moon and Injun Expert.

In his second of his three appearances under the pen of Vic Lockman, Beyond the Moon, Professor Pintail was drawn as an anthropomorphic dog. He was depicted as a notorious astronomer from the Duckburg Space Institute, which is hard to square with his debut but does seem to fit with his involvement with the Planetarium in Injun Expert. 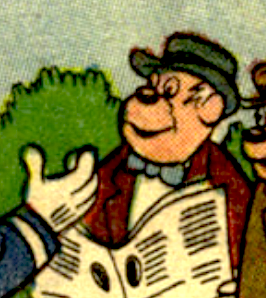 Pintail mistakenly drawn by Strobl as a dognose character in Beyond the Moon (1963).
Community content is available under CC-BY-SA unless otherwise noted.
Advertisement