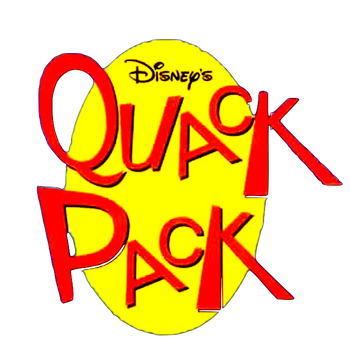 Quack Pack is a 1996 animated series focusing on Donald Duck and Huey, Dewey and Louie Duck's lives in Duckburg. Although its inception was obviously inspired by DuckTales, it is not a straight spinoff of it, but rather inspired by the 1940's and 1950's era of Donald Duck; an obvious consequence of this was the presence of many humans alongside the anthropomorphic duck stars of the show, and the near-total absence of dognoses.

The show is also notable for its aging-up of Huey, Dewey and Louie Duck into teenagers with three distinct personalities. This drastic change, which was later echoed in DuckTales 2017, has both made the show controversial among fans and made its place in Duckverse canon significantly blurry. Although it's understood by this Wiki to still be canonical in some form, significant speculation is required to explain either how and why Huey, Dewey and Louie turned back to normal, or to place Quack Pack into the perpetual future of present-day stories.

Donald Duck tries to balance his working and romantic relationship with Daisy Duck with his guardianship of a now teenage Huey, Dewey and Louie Duck.

At the DuckTales 2017 panel at San Diego Comic Con 2019, various images shown included the title image of Quack Pack recreated with characters from the DuckTales reboot. In addition to Donald, Huey, Dewey, and Louie, the image featured Mrs. Beakley, Webby Vanderquack, Scrooge McDuck, and Della Duck. While Beakley, Scrooge, and Donald sport outfits resembling those worn by their counterparts in the original DuckTales, the other five characters all appeared in new ensembles. [1] Also, to threaten Louie, Gavin shreds a photograph of Donald Duck, Huey, Dewey and Louie Duck that resembles the title image of Quack Pack.

Retrieved from "https://scrooge-mcduck.fandom.com/wiki/Quack_Pack?oldid=43816"
Community content is available under CC-BY-SA unless otherwise noted.