The long-lived Quagmire McDuck was the son of Potcrack McDuck and Scrooge McDuck's great-uncle. He was extremely stingy (Scrooge McDuck doesn't remember him ever spending a single cent), but actually spent all of his money on a ruby to repair the old McDuck Watch; that ruby was the only heirloom he left to his grandnephew Scrooge McDuck when he finally died in 1955.

Quagmire married at some point, and had two daughters. One, Elizabeth McDuck, married a Mr McDivot and became the mother of Bogford “Bogey” McDivot, while the other, Margaret, married a man named Glomgold, a cousin of Flintheart Glomgold's father Brickheart's.

Quagmire McDuck was first mentioned in 1955 in The Heirloom Watch. He later appeared in Don Rosa's Duck Family Tree and its various remakes, and a version of him was briefly seen as a ghost in DuckTales 2017. An interview with John Lustig published in 2012 in the Danish DDF(R)appet #20, and later posted in English on the blog The Daily War Drum under the title of Bogford McDivot, provided most of the details of Quagmire's genealogy.

It is often speculated in fan circles that Quagmire is the grandfather of some of Scrooge McDuck's more distant cousins, such as Moocher McDuck, Melchior McDuck or Theobald McDuck — which would require him to have had at least one more child aside from Margaret and Elizabeth. He is also sometimes reckoned to be the father of Pokerface McDuck.

Quite how Quagmire became so long-lived is another matter for theorists to seize onto, and the possibility that Quagmire was an occultist and alchemist has been raised.

In Johannes A. Grote's Duck Family Tree, the name of Quagmire McDuck is curiously matched to a portrait from a Carl Barks story which much more closely resembles Pothole McDuck, as it belongs to a bearded riverboat captain. A different portrait, much more alike to Rosa's depiction of Quagmire, is included as this Quagmire's brother and thus another great-uncle of Scrooge's. 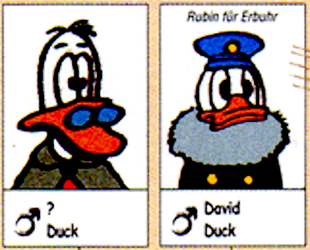