Raiders of the Doomsday Vault

Raiders of the Doomsday Vault!

Raiders of the Doomsday Vault is the fourteenth episode of Season 2 of DuckTales 2017, a television cartoon episode. It features the 2017 Continuum versions of Scrooge McDuck, Dewey Duck, Della Duck, Flintheart Glomgold and Zan Owlson, with Ludwig von Drake, Huey Duck and Louie Duck getting mentions. Bentina Beakley is spoken on the phone to, but does not appear in the flesh. The Ludwig von Drake A.I. and Von Drake's children Corvus, Anya and Klara make their debuts.

Flying to the polar regions to try and save the Von Drake Doomsday Vault seed repository from a slow destruction (and make a hefty buck in the process), Scrooge McDuck makes the mistake of taking along the spectacularly reckless duo that are Dewey Duck and his recently-returned mother Della! And as if that wasn't enough, Flintheart Glomgold has decided to show up…

Raiders of the Doomsday Vault was released on May the 14th, 2019. 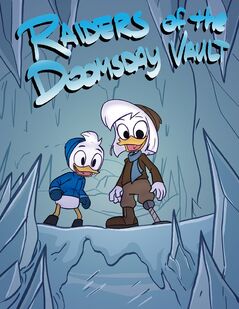 Add a photo to this gallery
Retrieved from "https://scrooge-mcduck.fandom.com/wiki/Raiders_of_the_Doomsday_Vault?oldid=33447"
Community content is available under CC-BY-SA unless otherwise noted.