The harmless-looking Randal Pace is one of the many parallel variations of the Hatbox Ghost who were accidentally summoned to Rain's World in 2020. Like the others, he usually manifests in human form as a ghost, rather than as a skeletal being — appearing as a young man with long hair, wearing a small bow on the ribbon of his top hat.

Randal Pace first appeared in a story covered by this Wiki in 2020 in From Left To Right, an installment of the semiparodical Charlie's Head Is In The Hatbox series. This particular take of the character was created by Tumblr user and Haunted Mansion fan “progirl88”, also active on DeviantArt. 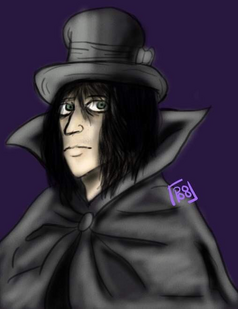 Progirl88's original concept art of Randal as supplied to Rain N. Thirteen in January of 2020.
Community content is available under CC-BY-SA unless otherwise noted.
Advertisement