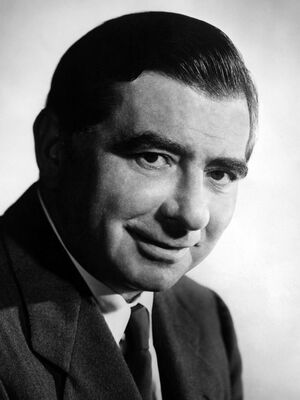 An iconic actor throughout the 1940's and 1950's, Robert Newton frequently portrayed antagonists, such as Bill Sykes in David Lean's take on Oliver Twist. His most famous role was Long John Silver in Disney's 1950 Treasure Island, a role he reprised in Long John Silver and the TV series The Adventures of Long John Silver; serving as the "definitive movie pirate", Newton's Silver notably defined the iconic "pirate accent" with its "arrrr"s and "you be"s. He would go on to play pirates, notably portraying a non-Disney Blackbeard in the 1952 film of the same name. Newton died in 1956 as a result of his chronic alcoholism.

Retrieved from "https://scrooge-mcduck.fandom.com/wiki/Robert_Newton?oldid=39425"
Community content is available under CC-BY-SA unless otherwise noted.