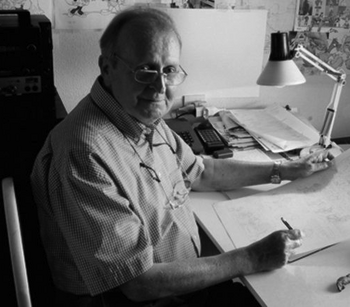 Romano Scarpa was an animator, animation director, writer and artist.

Romano Scarpa, born in Venice on the 27th of September, 1927, grew up reading the earliest Italian translations of Disney comics, and was especially impressed with Floyd Gottfredson's Mickey Mouse serials.

In the 1940's, inspired by Walt Disney, he opened an animation studio, producing a couple of shorts and several commercials. Later however, he gave up on his studio and began working irregularly for Disney comics. In 1956, he was contacted by the Italian Disney comics editors, who knew of his artistic talent and love for Gottfredson, and informed him that Gottfredson had stopped producing serials in America and was now, on orders of his editors, only penning comic strips. This left the Italian editors in quite the pickle, as serials by Gottfredson, reprinted as whole stories, were one of the main features of Topolino, and they felt that strips compilations could not easily replace them. Scarpa thus wrote a pastiche of Gottfredson's style, The Mystery of Tapiocus VI, copying the layout usually obtained by reworking strips into pages and even sticking a few "mistranslated" English signs in the background.

Following this, Scarpa wrote countless Disney comics (though the plot was sometimes written by other writers such as Guido Martina, and other artists such as Giorgio Cavazzano and Sandro Del Conte often inked his stories after the 60's), not only for Mickey Mouse but also for Scrooge McDuck, Donald Duck or even the Seven Dwarfs. Throughout his long career, Scarpa created several recurring characters, including Brigitta McBridge, Jubal Pomp, Dickie Duck, Atomo Bleep-Bleep, Portis Plottigat and many more.

Retrieved from "https://scrooge-mcduck.fandom.com/wiki/Romano_Scarpa?oldid=13552"
Community content is available under CC-BY-SA unless otherwise noted.