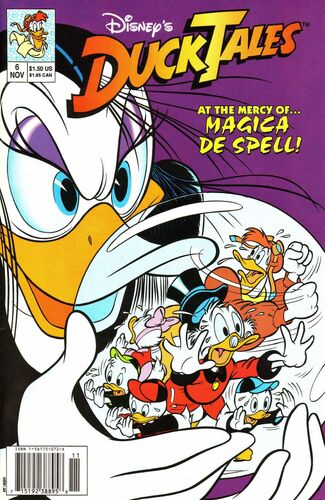 Scrooge's Quest is a six-part series, mostly written by Marv Wolfman and drawn by Cosme Quartieri and Robert Bat. It is itself part of the wider DuckTales series.

Magica De Spell kidnaps Webby Vanderquack on an innocent amusement park outing, sending an overprotective Scrooge into a panic. Scrooge is forced to give Magica the Number One Dime for ransom… only for Magica to escape and keep Webby anyway. As Magica hides in unlikely places to take Scrooge's attention off the dime, the old billionaire is forced to travel around the world to look for the witch and her young captive…

Magica De Spell, after capturing Webby Vanderquack, sends out her "ransom note" demanding the Number One Dime. She and Scrooge are to meet on "the Bridge on Top fo the World", the Bridge of Refridgamagordia, a nightmarish mile-long ice bridge in the North Pole.

Scrooge's search for Magica De Spell takes him to his bamboo plantations in Napalabama, where mysterious monsters from the "Howling Hills" seem to have cursed all his bamboo to fall apart at the most inconvenient of times. Are they really monsters, and is Magica behind it all once again?

3 - The Fall of New Atlantis

Magica De Spell strikes an alliance with Flintheart Glomgold and the Beagle Boys while Scrooge inspects his latest innovation, the New Atlantis, a gigantic cutting-edge oceanic shipping station and scientific observatory. Magica has not given up on ruining Scrooge, and sends her newly-recruited Beagle Boys minions, in pirate guise, to take over the fantastic ship.