A car so old that, when wanting to repair it, its owner had no choice but to buy their spare parts from the Duckburg Museum, this old car was driven around by Scrooge McDuck in 1957-1958. He notably once came across Huey, Dewey and Louie Duck while driving a very battered-looking version of it to the Museum to get it fixed up.

This version of Scrooge McDuck's car was created by Carl Barks for the sake of the 1958 one-pager gag, Cars Old And New!. A pin released in 2004 also features Scrooge driving a very similar car, though this is more likely than not to be a coincidence.

Barks later created a different antique car for Scrooge to drive in Chugwagon Derby (1961); with this in mind, precisely when and why Scrooge purchased the 1958 old car is considerably unclear. It is impossible to jump to the assumption, as one might be tempted, that the 1958 automobile is simply an earlier design for the more notorious one Barks drew in 1961, as the 1961 story made it explicit that Scrooge had not driven that car for decades.

Another point of confusion exists with Scrooge McDuck's Old Car: its color. Cars Old And New! was first printed in black-and-white, and as such, various later printings worldwide gave it wildly different color-schemes, from rust to green to purple (as pictured). 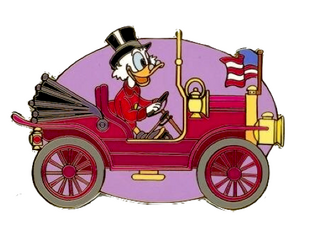 The 2004 pin.
Add a photo to this gallery
Retrieved from "https://scrooge-mcduck.fandom.com/wiki/Scrooge_McDuck%27s_Old_Car?oldid=33055"
Community content is available under CC-BY-SA unless otherwise noted.