Sea Captain stories
The Sea Captain, sometimes known by the fan-generated name of “Captain Decken”, was a human man who is now a ghost

This smartly-dressed mustachioed Sea Captain was once a pirate. Although jovial, he had a tendency to arrogate himself more of the loot than he was owed, which eventually drove his crew to mutiny against him and kill him. As a ghost, the Sea Captain became a semi-regular resident of the Haunted Mansion, usually coming back to the Grand Hall in time for parties via the hearse service. He was already a denizen of the Mansion in 1879 when he helped Zeke Holloway defeat Atticus Thorn alongside several other ghosts, with Holloway returning his long-lost Death Certificate to him in the process. By then, he had also somehow lost his treasure, which he told Holloway to keep an eye out for on the off-chance.

The Sea Captain was created for the Disneyland attraction The Haunted Mansion. He is widely acknowledged as an evolution of the original “Sea Captain” concept in Ken Anderson's 1957 story treatments for the potential Haunted House attraction, best-known in its incarnation as the villainous Captain Bartholomew Gore.

The Sea Captain animatronic used in the Disneyland and Walt Disney World Mansions shares a face mold, albeit with different facial hair, with the Auctioneer in the Pirates of the Caribbean ride (as does one of the Duelists). In an amusing coincidence, the Auctioneer's design as originally sketched up by Marc Davis was itself visibly influenced by Ken Anderson's concept for Captain Batholomew Gore, with the Sea Captain's appearance in the finished 1969 ride thus representing the Sea Captain coming full circle.

Similarly, the role of Captain Gore as the Hanged Man in the Stretching Room and former Master of the House was eventually allocated to the Ghost Host — who was voiced in several media by Corey Burton, also the Sea Captain's only known voice actor to date. 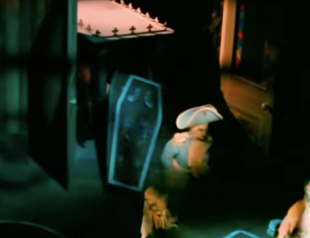 The Sea Captain emerging from the Grand Hall Hearse in the Walt Disney World Haunted Mansion. 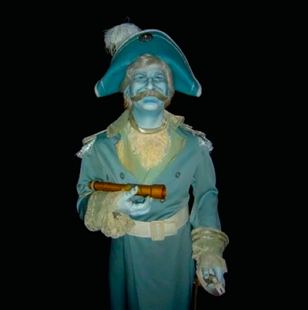