The Missing Links of Moorshire

A member of the clan McDuck, and by all appearances identical to his Prime Universe counterpart, Sir Donald McDuck was nicknamed "Black Donald" due to his foul temper, akin to that of his descendant and namesake Donald Duck. Sir Donald invented golf, but an incident involving his notorious anger issues led to King James banning the sport. However, Scottish druids from Moorshire had already taken a liking to the game and created a mystical Fairy Realm revolving around a supernatural golf course, allowing them to keep playing unseen by the non-magical government.

This version of Sir Donald was mentioned in the 2017 episode of DuckTales 2017, The Missing Links of Moorshire. 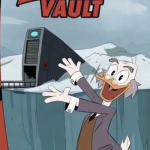