Dead tree adorned with a skull

Mark out a point on Morgan's Island

The Skeleton Tree was a landmark on Morgan's Island.

As marked out on Henry Morgan's map to the location of his treasure, the Skeleton Tree was an old tree stump vaguely in the shape of a lurching, skeletal, humanoid figure. Adding to the illusion by fastening a real skull to the wooden “neck”, Morgan also made the skull part of the trail to his treasure; one was supposed to unhook the skull from the tree and look through its left eye to spot the crossed bones on the ground, marking the spot were the treasure was buried.

The Skeleton Tree appears in the 1942 story Donald Duck Finds Pirate Gold. It was already present in storyboards for the original cancelled 1939 Morgan's Ghost film project from which Pirate Gold was adapted.

A somewhat different-looking Skeleton Tree was again featured in the loose remake, and de facto prequel, to Donald Duck Finds Pirate Gold, 1953's Captain Hook and the Buried Treasure. However, it is located on a different (if similar) treasure island, off the coast of Great Britain, and thus cannot be held to be the same tree. 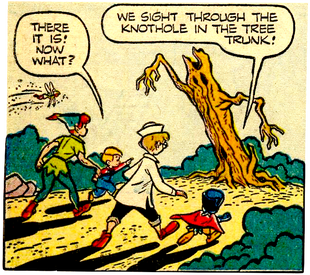 The Skeleton Tree in Captain Hook and the Buried Treasure.
Add a photo to this gallery
Retrieved from "https://scrooge-mcduck.fandom.com/wiki/Skeleton_Tree?oldid=47880"
Community content is available under CC-BY-SA unless otherwise noted.