May the 27th, 1987 (release date)
Soccermania is a cartoon story written by Tad Stones, Michael Giaimo and Joe Ranft and directed by Matthew O'Callaghan and Darrell Van Citters. It features Sport Goofy, Scrooge McDuck, Huey, Dewey and Louie Duck, the Beagle Boys, Gyro Gearloose and Donald Duck, as well as a cameo by Roger Rabbit and a deleted appearance by Gladstone Gander.

Huey, Dewey and Louie want to create their own soccer team for the great tournament and ask their Uncle Scrooge to support their team by giving them a trophy. Scrooge reluctantly accepts and gives them an old, dusty trophy which he assumes not to be worth ten cents. In fact, it turns out the trophy is an antiquity worth millions of dollars… To try and win his trophy back, Scrooge decides to officially sponsor his nephews' team and hires Sport Goofy as the team's captain. However, the rival team turns out to be the Beagle Boys!

The short was first released in 1987. It foreshadows DuckTales.

For unknown reasons, several scenes were cut from the broadcast version of the film. One, of which an animation cell is available, showed a large Beagle Boy in drag kissing Sport Goofy on the cheek (one can only guess as to the purpose of this display). Another featured Gladstone Gander in a speaking role (where he would have been voiced by Will Ryan); a duck resembling Gladstone can still be seen in one of the crowd shots, sitting in front of Roger Rabbit, although it's unknown if he was meant to be Gladstone. 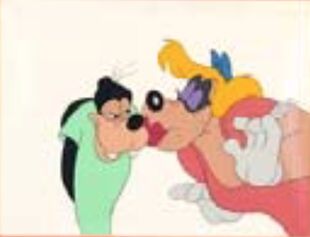 The animation cel.
Community content is available under CC-BY-SA unless otherwise noted.
Advertisement