Something with Spirou (Un Truc avec Spirou in the original French) is a comic one-pager written & drawn by Oldiblogg. It features Spirou, Fantasio and Spip.

Spip doesn't find much interest in the temple Spirou and Fantasio are exploring, but it may yet reserve a nice surprise…

This comic was created as part of the Fourth Challenge of the Défis de Spirou event. Though it did not win the contest, an extract from it was eventually printed in the Journal de Spirou #3979.

The comic had previously been posted on DeviantArt by its writer.

The English version above is original to the Wiki; the comic has not received any official English translation. 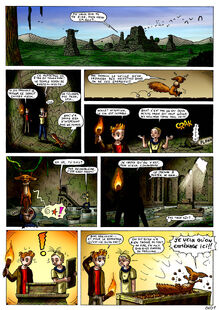 The original French version.
Add a photo to this gallery
Retrieved from "https://scrooge-mcduck.fandom.com/wiki/Something_with_Spirou?oldid=40254"
Community content is available under CC-BY-SA unless otherwise noted.