Spacecrafts are a type of small, advanced spaceships the planet Zoa.

Spacecrafts are the most common type of spaceship constructed by the Zoaites. Flat vehicles about the size of an Earth car, with a bubble-like transparent canopy, they are as good for flying through space at faster-than-light speeds as they are at flying within a planet's atmosphere.

The weakest point of a Spacecraft is the control-pod, a chimney-like appendage at the back. If it is smashed, the Spacraft will spin out of control and eventually crash. To prepare for this, Spacecrafts include ejectable seats activated thanks to a button on the control panel.

At least some Spacecrafts possess a molecular disguise function, which allows them to shapeshift into the form of a more innocuous device such as a car (something Ambassador Torgel made use of when visitng Earth). Additionally, the Zoa Space Force dispose of special Spacecrafts equipped with zap-gun cannons, though they proved ineffective against Airiodactyls when the Force tried to use them to combat the 1980 infestation.

The Spacecrafts appear in the 1980 story Mission to Planet Zoa.

On the 1985 cover for the story's French publication, Mickey Mouse and Goofy can be seen escaping from a fleet of Gravicycles at the commands of a rather different Spacecraft than any of the models seen in the story itself. It is golden in color, has two headlights, two rocket-like appendages on its sides, and a control-pod in the front, with all of this making the front of the device resemble a human face. As the scene itself does not appear in the story by any stretch, it is possible that the cover depicts a second visit of Mickey and Goofy to Zoa, wherein they did fly such an altered Spacecraft (possibly representing a more modern design). Prior to the story, other spaceships somewhat resembling Spacecrafts had been featured in unrelated tales. For example, the small Saturnian ship used by Donald Duck to escape the wrath of Rebo in the 1960 Uncle Scrooge's Money Rocket bears a marked resemblance to a Spacecraft. 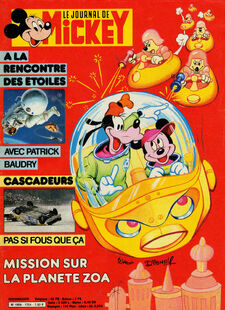 The alternate Spacecraft flown by Mickey and Goofy on the cover of Le Journal de Mickey #1704 (1985, unknown artist). 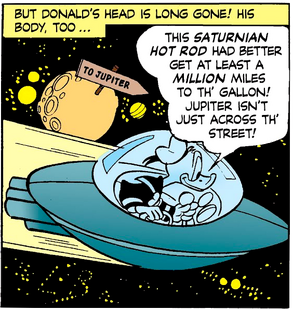 The Saturnian spaceship seen in Uncle Scrooge's Money Rocket (1960).
Add a photo to this gallery
Retrieved from "https://scrooge-mcduck.fandom.com/wiki/Spacecraft?oldid=20347"
Community content is available under CC-BY-SA unless otherwise noted.