Spirou 2000 is a comic two-pager created by Andé Franquin. It features Spirou, Fantasio, Pacôme de Champignac, Spip and the Marsupilami.

A window into the then-distant future of 1976! Spirou and Fantasio, who have remained young through the decades thanks to an invention of the Count's, drive to his castle in their flying car for his 100th birthday, and the old inventor has a surprise in store for them!

This short story was created by André Franquin in 1957 and printed in the Spirou 2000 booklet that accompanied Le Journal de Spirou #1000, whose conceit was a fanciful, pulp-sci-fi fac-simile of what the Journal de Spirou #2000, set to be printed in 1976, would look like. Spirou 2000 contained two other stories in the Spirou & Fantasio universe, This Is The Robot Speaking, Tif & Tondu Unmask Shock and Uncle Paul's (Almost) True Stories, as well as other sci-fi parodies of the Journal’s regular features.

Obviously, the real year of 1976 (whether in the real world or in the Prime Universe) was nothing like that depicted in the story, which must therefore be considered a "potential future" rather than events that eventually did happen. It is, however, fully appropriate to note that the story reveals the birth date of the Count of Champignac as being 1876 (making him 74 in his debut in There's A Sorcerer in Champignac). 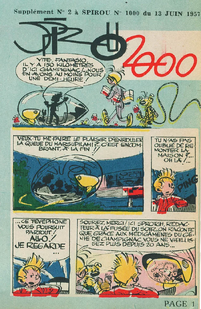 French version of the first page.
Add a photo to this gallery
Retrieved from "https://scrooge-mcduck.fandom.com/wiki/Spirou_2000?oldid=40256"
Community content is available under CC-BY-SA unless otherwise noted.