Spirou Doesn't Like Water (Spirou n'aime pas l'eau in the original French) is a comic one-pager possibly written by Rob-Vel, and drawn by Luc Lafnet. It features Spirou and, in his debut, Entresol.

Spirou begins work at the Moustic Hotel as a bellhop. Most of the staff is welcoming, but not the chief of staff, Entresol…

This one-pager was released on April the 28th, 1938 in Le Journal de Spirou #2 in Belgium. It was reprinted in the Spirou par Rob-Vel collection of all of Rob-Vel's Spirou comics. It has not known an official English printing to this day. The comic, the second-ever featuring Spirou, appears to follow directly from The Birth of Spirou. 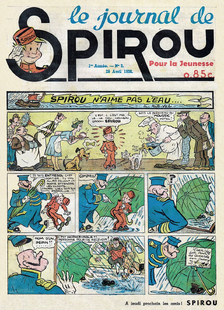