Spirou in Mining Country (Spirou au Pays Minier in the original French) is a comic one-pager possibly written by Rob-Vel, and drawn by either him or Luc Lafnet. It features Spirou and M. Papillon.

M. Papillon gives Spirou a reward of 5 Francs for his good work and gives him the day off. The young bellhop wanders, but soon finds a righteous cause to defend.

This one-pager was released in June of 1938 in Le Journal de Spirou #9 in Belgium. It was reprinted in the Spirou par Rob-Vel collection of all of Rob-Vel's Spirou comics. It has not known an official English printing to this day.

The story is interesting for featuring the first glimpse of Spirou's kind-hearted persona, after eight first gags where he was more of a mischief-maker than a hero. Indeed, the page is so devoid of traditional humor that it is possible it was commissioned by the publisher to make Spirou into a more "moral" character overnight, with the writer and artist having little say in the matter — though that is merely a theory. 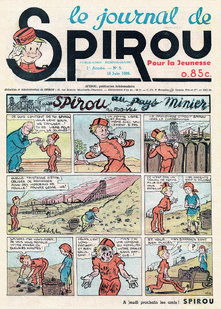