Spirou the Horticulturist (Plus fort qu'Hercule in the original French) is a comic one-pager possibly written by Rob-Vel, and drawn by either him or Luc Lafnet. It features Spirou, Entresol and M. Papillon.

Desperate to save a dying exotic potted plant he owns, Spirou goes so far as to create a new kind of chemical fertilizer, which turns out to be much, much more efficient than he intended.

This one-pager was released in October of 1938 in Le Journal de Spirou #26 in Belgium. It was reprinted in the Spirou par Rob-Vel collection of all of Rob-Vel's Spirou comics. It has not known an official English printing to this day. 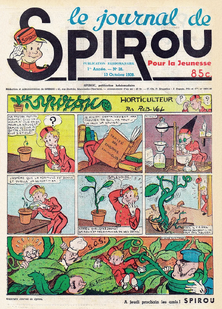 The French version.
Add a photo to this gallery
Retrieved from "https://scrooge-mcduck.fandom.com/wiki/Spirou_the_Horticulturist?oldid=40275"
Community content is available under CC-BY-SA unless otherwise noted.