Stronger than Hercules
(Plus fort qu'Herucle)

October the 6th, 1938 (release date)
Stronger than Hercules (Plus fort qu'Hercule in the original French) is a comic one-pager possibly written by Rob-Vel, and drawn by either him or Luc Lafnet. It features Spirou and Entresol, with the title obviously mentioning Hercules.

For once, Spirou and Entresol partner up on a trick — a rigged strongman show…

This one-pager was released in October of 1938 in Le Journal de Spirou #25 in Belgium. It was reprinted in the Spirou par Rob-Vel collection of all of Rob-Vel's Spirou comics. It has not known an official English printing to this day. 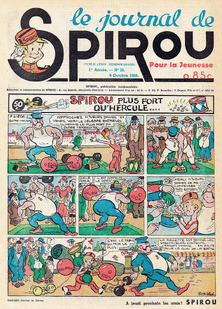