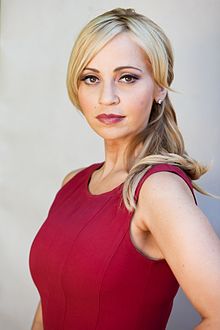 Tara Strong is a Canadian-American voice actress born on February 12, 1973.

Outside DuckTales 2017, Tara Strong has done professional work in numerous films and television series, both live-action and animated. Among her most well-known voice roles include Bubbles in The Powerpuff Girls, Timmy Turner and Poof in Nickelodeon's The Fairly OddParents, and, most relevantly, Twilight Sparkle in My Little Pony; in allusion to this role, she voices Briar in DuckTales 2017. Strong also voiced non-Disney character Harley Quinn in the crossover video game LEGO Dimensions.

Retrieved from "https://scrooge-mcduck.fandom.com/wiki/Tara_Strong?oldid=42651"
Community content is available under CC-BY-SA unless otherwise noted.