Welcome to my Tumbler!
Temer, Villainess of Fear is a female alien of unknown species from the 2017 Continuum's Yonder Galaxy.

This fearsome inhabitant of the Yonder Galaxy is one of its most feared supervillains. A red-eyed demoness of mysterious origins and endless ambitions, Temer secretes a black ichor that seems to be literal "nightmare juice", inducing hallucinations of their worst fears to anyone who touches even a drop of it. Temer seems to feed on her victims' fear, drawing power from it.

Temer was feared enough to make #17 on the Galactic Villains Leaderboard at one point, although she had dropped all the way to #73 shortly before Lord Dominator revealed herself to the Yonder Galaxy and defeated almost all of its villains in her bid to conquer and destroy said Galaxy (Temer most likely included).

Temer was created by a fan on Tumblr as part of the WOY Villain Leaderboard Challenge instigated by Francisco Angones, wherein fans were invited to submit their own original Wander Over Yonder villains who would then get a ranking in the official Galactic Villains Leaderboard.

She was, interestingly, not the only nightmare-themed submission to the Challenge, as the same day also saw the creation of the Nightmare. 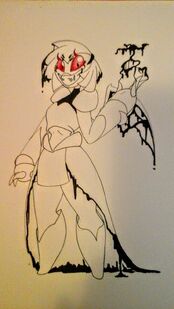 The original concept art of Temer.
Add a photo to this gallery
Retrieved from "https://scrooge-mcduck.fandom.com/wiki/Temer?oldid=22026"
Community content is available under CC-BY-SA unless otherwise noted.