The Ballad of Duke Baloney

The Ballad of
Duke Baloney

The Depths of Cousin Fethry

The Town Where Everyone Was Nice
The Ballad of Duke Baloney is a cartoon story written by Colleen Evanson (alongside DuckTales 2017’s usual team of writers), and directed by Jason Zurek. Taking place in the 2017 Continuum, it features Scrooge McDuck, Louie, Webby, Roxanne Featherly, Flintheart Glomgold, Blarney O'Duck, and, in their debut, Zan Owlson, Fisher and Mann.

Four months after Magica's Shadow Army attacked Duckburg, Flintheart Glomgold is still missing, with the much more amicable businesswoman Zan Owlson replacing him as head of Glomgold Industries. But is Glomgold dead? The question soon proves more philosophical than medical when Louie and Webby stumble upon "Duke Baloney" in the Duckburg docks — an amnesiac Glomgold who incurred memory-loss from his traumatic experience with the Shadow Army and lives on as a honest, hard-working fisherman beloved by the local community… Can they figure out the mystery of Glomgold/Baloney's origins, and make him remember who he really is? More importantly, should they?

The third episode of Season 2 of DuckTales 2017, The Ballad of Duke Baloney was released on November the 3d, 2018.

At the point, Scrooge says "I'm not the one with amnesia". This could be a possible in-joke about the similar original series episode "Blu Collar Scrooge"​​​​​​, which saw Scrooge McDuck (instead of Glomgold) lose his memory (and Scottish accent) and begin a new and happy life in the working class. 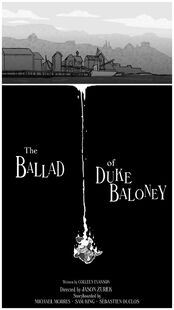