The Birth of Spirou (La Naissance de Spirou in the original French) is a comic one-pager written and drawn by Rob-Vel, possibly with the help of Luc Lafnet. It features, in their debuts, Spirou, M. Papillon and the Maestro.

M. Papillon, of the Moustic Hotel, tries to hire a bellhop, but none of the candidates are suitable. In the end he goes to see a strange artist who draws the perfect bellhop and gives him life — the boy leaps off the drawing board and introduces himself as Spirou.

This one-pager was released on April the 21st, 1938 in Le Journal de Spirou #1 in Belgium. It was the first-ever Spirou comic, though the character had been soft-debuted on the cover illustration of Le Journal de Spirou #0, with an in-character letter to go with it. It was reprinted in Spirou & Fantasio: Hors-Série #3 and, finally, in the Spirou par Rob-Vel collection of all of Rob-Vel's Spirou comics. It has not known an official English printing to this day.

Though the presumed author of the comic is Rob-Vel, traditionally hailed as Spirou's creator, the Maestro is a caricature of Rob-Vel's friend and associate Luc Lafnet. This has led to some debate on whether Lafnet might have contributed to the comic, or even drawn it himself altogether. 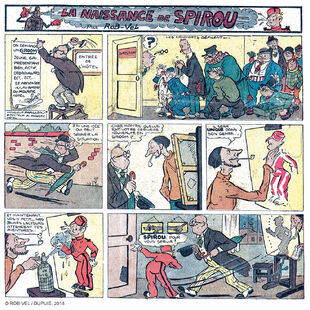 The French version.
Add a photo to this gallery
Retrieved from "https://scrooge-mcduck.fandom.com/wiki/The_Birth_of_Spirou?oldid=15935"
Community content is available under CC-BY-SA unless otherwise noted.