The Bride Returns was a Vinylmation merchandise item released in the WonderGround Gallery line in the 2010's. Originally costing $54.99, it was developed by Jasmine Becket-Griffith over several years and depicts Constance Hatchaway and two spiders.

The Bride Returns is a depiction of Constance Hatchaway, depicted with a mysterious smile, smeared make-up, a flowing orange heart (akin to earlier Beating Heart Bride's red ones), and holding her axe in one hand and a candle in the other. Constance's face and hair retain their natural color, rather than being a ghostly blue as in usual depictions of Constance. Two unnaturally large spiders with orange markings are crawling up her dress, though she pays no mind.

Like most Vinylmation figures of Disney Park-original characters, The Bride Returns does not feature the Mickey Mouse ears typical of the Vinylmation brand.

As revealed on ArtWanted.com by Becket-Griffith herself, several concept paintings were created of the Bride from various angle in preparation for the creation of The Bride Returns, and the process, all in all, took several years. Becket-Griffith also created additional art to decorate the box.

Two of Becket-Griffith's acrylic paintings have surfaced on the Internet, with the original of the first having sold for $13,000. The second features the Organ Banshees in the background, although they are, of course, not featured in the actual figure. 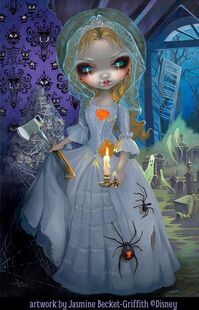 First and most widely-reproduced concept painting. 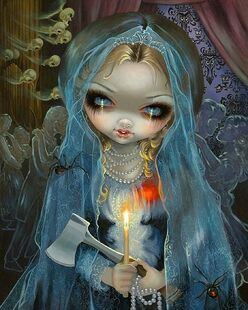 Second concept painting, featuring Organ Banshees and Ballroom Dancers in the background.
Add a photo to this gallery
Retrieved from "https://scrooge-mcduck.fandom.com/wiki/The_Bride_Returns?oldid=31895"
Community content is available under CC-BY-SA unless otherwise noted.