What Ever Happened to Donald Duck?
The Duck Knight Returns is the 16th episode of Season 2 of DuckTales 2017. It features Scrooge McDuck, Dewey Duck, Launchpad McQuack, Jim Starling/Darkwing Duck/Negaduck, Megavolt, and in their debut Drake Mallard/Darkwing Duck, Alistair Boorswan, Tad, Hot Couture, and the Darkwing Dancers. The 2017 versions of Liquidator, Quackerjack, and Bushroot also appear, and Gizmoduck and Johnny Empire are referenced.

While attending an autograph signing by actor Jim Starling, Launchpad and Dewey learn that Darkwing Duck is being made into a a film, Darkwing: First Darkness, by McDuck Studios. However, upon learning that the dark, atmospheric reboot stars Drake Mallard in his old role, Starling convinces Launchpad to help him sabotage the film.

The flashback sequence to Drake Mallard is done through comic art, provided by Mike Peraza (though Tad Stones himself had originally been asked). 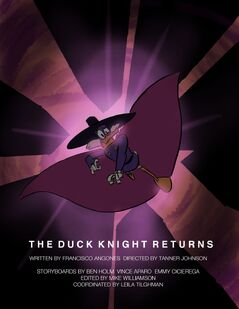 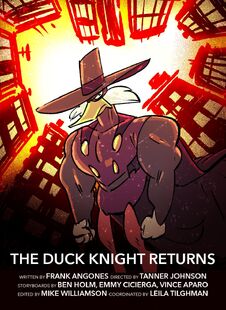 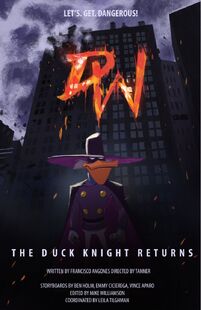