December of 1942 (original release)
1943 (definitive version)
The Gremlin is a novel written by Roald Dahl and illustrated by Bill Justice and Al Dempster. It features the debut of the Gremlins (including Gremlin Gus and Gremlin Jamface), the Spandules, and the aeroplane pilots Gus, Stuffy and Jamface. Goblins, Pixies, Hobgoblins and Trolls are mentioned.

One day, R.A.F. pilot Gus encounters a surreal sight: a little man diligently drilling holes into his plane's wing. This is only the beginning of the pilots' trouble; the poor men, Gus, Jamface, Stuffy, discover that the "little men" are Gremlins, elflike creatures with a grudge against airplanes in general ever since their ancestral forest was razed to make way for a plane factory. But, though resentful, the Gremlins are polite and decent folk, and they know a thing or two about engineering… What if an alliance could be worked out between men and gremlins?

1943's The Gremlins, written by Roald Dahl based on legends and tall tales of the R.A.F., was initially written as the screenplay of an animated film to be produced by Disney. However, due to rights issue, the production dragged on; in the meantime, Dahl published the story as a written tale, with illustrations by two Disney animators based on the storyboards and concept art for the film. This was an awakening for Dahl, who would go on to become a world-renowned writer of children's literature.

In this form, The Gremlins was first printed in December of 1942 in that month's issue of (of all things) Cosmopolitan, under the pseudonym of ‘Pegasus’. The book was printed in earnest, with the text polished into a proper children's novel, in 1943, directly by Walt Disney Publishing. This version of the book was reprinted as a limited edition in honor of the R.A.F.'s 60th edition, and then more widely in September of 2006 by Dark Horse Publishing. Shortly after this reprint, the comic sequel Return of the Gremlins was ceated 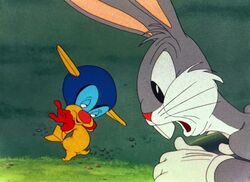 In the end the film (which had, at one point, been intended to be a live-action/hand-drawn hybrid, with the Gremlins animated and the pilots flesh-and-blood) had not yet been made by the end of the war, at which point Disney gave up on the project, for all that they had already successfully marketed the characters and produced comics starring Gremlin Gus. The closest to an animated rendition of The Gremlins that ever came were the 1943 and 1944 Warner Bros. cartoons Falling Hare and Russian Rhapsodies, which saw Bugs Bunny facing off against Gremlins whose design, while ultimately distinct, drew obvious inspiration from the Disney Gremlins. 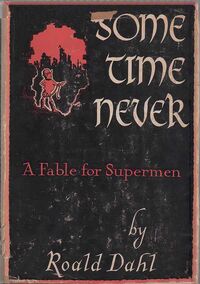 In 1948, Roald Dahl rewrote The Gremlins as a bleak allegorical novel aimed at an adult audience, under the title of Some Time Never. In this version, the Gremlins — none of whom are named, not even the Leader — do not partner up with the R.A.F. pilots, but instead retreat back underground when they catch wind of the nuclear weapon, as their Leader wisely rules that with such power at their fingertips, mankind will destroy itself sooner or later and the Gremlins will then inherit the Earth. The rest of the book is told through the reports of spy-Gremlins to the Leader, and sees the Gremlins' grim prediction come to pass through World Wars III and IV. In a surprising epilogues, the Gremlins, coming out to dominate the Earth, realize too late that they were embodied figments of man's imagination all along, and they thus cannot survive him, vanishing without a trace to leave worms as the only animals left in the world.