The Life and Times of Scrooge McDuck 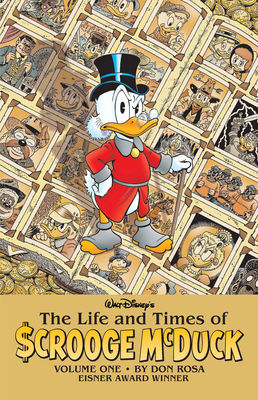 The Life and Times of Scrooge McDuck (also written The Life and Times of $crooge McDuck, an often abbreviated as L&T, or alternatively as LoS, for Life of Scrooge) is an award-winning American comic series. Its original twelve chapters were written and drawn by Keno Don Rosa, who added several "bonus chapters" to the canon later on, eventually joined by other authors following Rosa's retirement.

The Life and Times of Scrooge McDuck are an attempt at solidifying the most important events of Scrooge McDuck's early life, from him winning his number one dime in 1877 to his first official meeting with his nephew Donald Duck and his grandnephews Huey, Dewey and Louie Duck. This story is told through the means of a photo album of Scrooge's life made by his sister Matilda, a picture of which opens each of the twelve chapters (a format usually not respected by the bonus chapters, which instead tend to be bookended by present-day scenes of Scrooge reminiscing about his past).

Scrooge arrives in Louisville where he tries to contact an uncle of his who already lives there: Angus McDuck, who (as Scrooge soon finds out) is now nicknamed Pothole. A lucky gambler, Angus just won at poker a steamboat, which he decides to use to search for a sunken treasure. However, the boat's original owner, swindling businessman and casino-owner Porker Hogg, follows them and attempts to steal the treasure, using as minions the local Beagle Boys, who would later turn out to be the fathers of those that currently chase Scrooge's money in Duckburg.