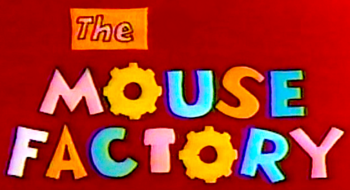 The Mouse Factory was an anthology TV series produced and directed by Ward Kimball between 1971 and 1973.

A precursor to House of Mouse, The Mouse Factory mainly served to rerun classic Disney cartoons with new linking segments. Each episode would feature a different celebrity guest interacting with classic Disney characters (portrayed by costumed actors), from Mickey Mouse to Witch Hazel.

Though the hosts were often just watching or recalling the relevant cartoons, they were woven into the story of the episode on a couple of occasions, meaning some episodes must be considered by the Wiki to take place far earlier than their release date.

An original piece of animation was featured at the end of each episode, which saw Mickey Mouse (drawn in 1930's pie-eye style, but in color) flying an aeroplane carrying the "The End" banner, only to bump into King Kong on the Empire State Building, who plucks the plane out of the air and eats it. This bizarrely means every episode ends with the apparent death of Mickey, though it's not hard to imagine his surviving the ordeal if some cartoon logic is applied, as, indeed, it is obvious that he must have.