The story presents itself as a facsimile of the October the 13th, 1885 edition of The Mysterious Chronicle, Thunder Mesa's local newspaper. Alongside some ads, including one for Madame Leota's séances, an article reports on sightings of ghosts seemingly escaped from Phantom Manor! The front page is taken up by a picture of the reader standing side-by-side with the Phantom himself, as the edition is one printed by the ghosts themselves using James Collins's abandoned spirit-photography equipment.

The Mysterious Chronicle was released in the first week of June of 2018. It appears to have been inspired by the Grim Gazette as seen as part of the Ghost Post even from a few years earlier. 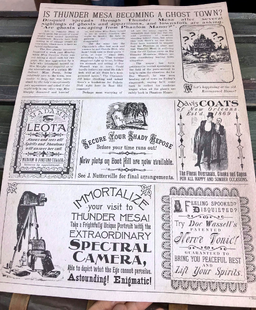 The back of the 'booklet'.
Community content is available under CC-BY-SA unless otherwise noted.
Advertisement