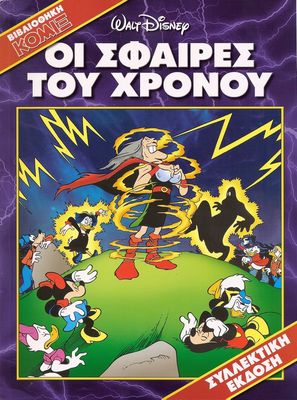 The Orb Saga, also known as the Millenium Orb Saga is a comic series written by Carol and Pat McGreal.

The series centers on two mysterious "Millenium Orbs" that seem to react to the presence of Mickey Mouse and Donald Duck, and the evil wizard Meringue the Malevolent, reborn after a thousand years encased in the middle of a mountain, who seeks to take over the world.

The Orb Saga was written as a celebration of the Year 2000. In its original version that was printed all around the world in 1999 and 2000, the orbs were forged in the year 1000, and the story takes place throughout 1999 and 2000. However, the saga was not printed until 2006 in the United States; therefore, the editors made the questionable decision of erasing the references to the New Millenium from the story; the present-day part of the saga is now taking place in 2006-2007, while the orbs were forged at some point of the 1700's. Due to it being what the authors originally intended, this wiki will mostly regard the original millenial version as the "true" version, although we shall also document the American version.