The Pessimist's Guide
to the Small Screen

The Pessimist's Guide to the Small Screen is a comic strip written and drawn by Aristide Twain. It features two members of the Crew of the Copper-Colored Cupids, one of them being Pessimist-242.

A Cupid is surprised to see Pessimist-242 seemingly watching television… on a TV that's not actually plugged in. It's clear that the mechanical cynic's comically bitter worldview is responsible somehow, but in what way, exactly? 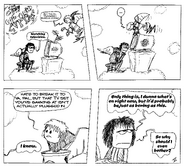 Original black-and-white lineart.
Add a photo to this gallery
Retrieved from "https://scrooge-mcduck.fandom.com/wiki/The_Pessimist%27s_Guide_to_the_Small_Screen?oldid=50530"
Community content is available under CC-BY-SA unless otherwise noted.