The Salacious Six! was an unofficial cartoon created in 2020 by James Silvani. Although bound up in the production history of DuckTales 2017, it did not actually relate to the 2017 Continuum, instead featuring the original Negaduck, Bushroot, Megavolt, Quackerjack and Liquidator as well as the debut of Big Mean Frank.

It seems the Fearsome Five have become the Salacious Six as a spurious sixth member is added to their ranks — and he might be the most evil member yet!

This cartoon was created overnight, and released on August the 14th, 2020 on Twitter by James Silvani as a sort of prank on DuckTales 2017 showrunner Francisco Angones, depicted as a villain on par with the likes of Negaduck for the crime of withholding spoilers about then-upcoming animated Darkwing Duck feature, Let's Get Dangerous!. 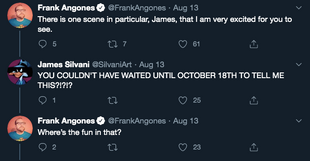 The Twitter conversation that led to the creation of this comic.
Community content is available under CC-BY-SA unless otherwise noted.
Advertisement