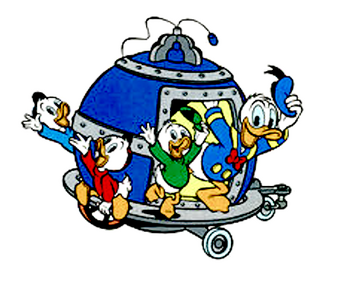 The Time Machine, also known as Donald Duck Time Travel, is a comic series by a variety of authors.

After a few stories that introduce the titular spherical time machine built by Gyro Gearloose, the series sees Donald Duck and his nephews accidentally sent through time by a malfunctioning machine, desperately trying to get their machine fixed to return to Duckburg while visiting a number of historical time periods.

These stories collectively form a "chapter 0", as they introduce Gyro Gearloose's Time Coupe, whose design is slowly tinkered into the familiar form seen throughout the series proper.

These stories were written and take place at various points after the seven chapters of Donald's voyage, and see Donald and friends once again using the no-longer-unreliable Time Machine.

Retrieved from "https://scrooge-mcduck.fandom.com/wiki/The_Time_Machine?oldid=9830"
Community content is available under CC-BY-SA unless otherwise noted.