January the 20th, 1958 (completion)
December of 1958 (release date)
The Twenty-Four Carat Moon is a comic story written and drawn by Carl Barks. It features Donald Duck, Scrooge McDuck, Huey, Dewey and Louie Duck, the Beagle Boys, Longhorn Tallgrass, the Maharajah of Eyesore and, in their debuts, Muchkale and two Rat Scientists. Muchkale's Crewmen are mentioned.

New satellite evidence discovers what's been hiding on the Dark Side of the Moon all along: another, smaller Moon hiding behind Luna itself. Surprising enough — but what really sparks Scrooge McDuck's interest is that the newly-discovered celestial body is made of pure, 24-carat gold! Within hours of the discovery being announced, a rocket race for first claim to the unimaginable treasure kicks off between Scrooge, the Terrible Beagle Boys, and two other tycoons, the Texan Cattle King and Indian Maharajah of Eyesore. Despite Donald Duck's reluctance, Scrooge and his nephews might just come out on top as far as the race between Earthmen is concerned — but what if there is a long-standing owner already on the Golden Moon?

The story is a noted favorite of Joe Torcivia out of all of Carl Barks's works.[1] 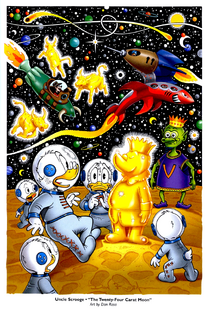 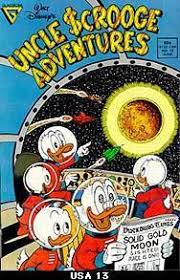