The Voice of God

The Voice of God

As they sail on their latest adventure with their Uncle Scrooge, Huey Duck discovers that the Beagle Boys have stowed away on the ship… he barely manages to foil the villains (with the help of Mickey Mouse and his sorcery), only to discover that Gladstone Gander is also aboard, with nefarious plans of his own!

This story was created by famed comic writer Rick Veitch in 1995, based on a dream he had in 1974.

It was printed in its original English as supplementary material in three foreign editions of the Carl Barks Library: first the Italian La grande dinastia dei paperi #45, and later the Greek Το Σκυλί του Ανεμοδαρμένου Λόφου #45 and the French La Dynastie Donald Duck #17.

Veitch also posted the comic's two pages on his personal blog in 2010. 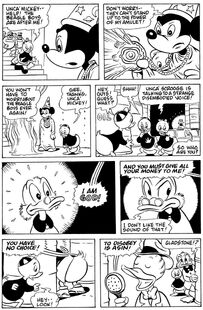