December the 20th, 2006
The Worst Excuse is a comic story written and drawn by Gilles Maurice. It features Donald Duck, Daisy Duck and Clarabelle Cow. José Carioca is mentioned (though not by name), and a picture of Otto Duck can be seen.

Donald Duck, who only arrives at his and Daisy Duck's 70th anniversary quite late at night, struggles to explain where he's been to his irritated paramour…

This cartoon was published on the back cover of the Danish (though English-language) DDF(R)appet #9.

A vaguely fourth-wall-adjacent gag, it refers back to the non-narrative front cover of the same book, where Donald was depicted eating ice cream with José with the background including, on the left, a depiction of Rio de Janeiro, and, on the right, one of Fort Drakeborough.

It is, to date, the only officially-printed Disney comic work of Gilles Maurice. 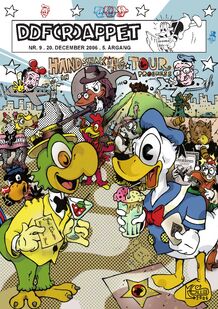 The surreal cover of DDF(R)appet #9.
Community content is available under CC-BY-SA unless otherwise noted.
Advertisement