The Time Vortex,[1] also known as the Time-Stream,[2] is a mysterious location, dimension or state of being which can be entered by time-travelers.

Seemingly a tangible representation of Time itself,[3] the Time Vortex is "the place where every moment of History meets".[4] It manifests as a space through which certain forms of time travel require the traveler to physically move. Other forms of time travel not involving the Vortex also exist, such as the Time Channel.

Either possessing a breathable atmosphere, or too removed from the normal laws of physics for its absence to matter, the Time Vortex is home to many strange creatures. It generally resembles a large swirling tunnel walled by dark cloudy surfaces of constantly-shifting color,[5] with opening in those clouds serving as windows into the various time periods. However, its appearance varies greatly from one account to another; it may well be that the Vortex has no one true appearance and looks different to all who enter it.

A common fixture of the Time Vortex's appearance is clockwork-like metal structures encircling the traveler; during their 1966 venture into the Vortex, Gyro Gearloose & Co. and Emil Eagle both observed floating clock faces, cogs and other mechanical parts of various shapes and sizes flying through the Vortex,[6] while to Magica De Spell using the Time-Tuner Vortex Spell, the Vortex itself appeared lines by a series of large identicalgolden rings.[7] The latter were also observed by Donald Duck in 1996, upon which occasion he also observed not just a scarce few windows into historical periods, but a number of floating visions from various periods of Earth's history.[8]

When Donald Duck and Mickey Mouse used a Time Pod from Ludwig von Drake's Time Machine to travel back from the corrupted 2019 to the source of the disturbance in the Jurassic period, the Pod was seen tumbling through a kaleidoscope-like jumble that soon snapped into focus as a rainbow-colored version of the Vortex. It is unclear if the temporally anomalous circumstances of this trip influenced this particular appearance of the Vortex.[11]

Two periods of History are bridged by the Time Vortex (in its ringed appearance), allowing Magica De Spell to jump from one to the other. (The Time Vortex) 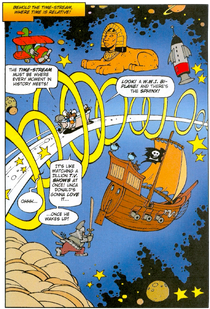 Donald Duck and Huey, Dewey and Louie have visions of Histoy as they fly through the Vortex (once again in ringed form). (The Bathtub at the End of the Universe) 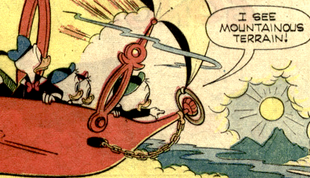 The time of King Og appears as a window in the fabric of the Vortex. (Og's Iron Bed) 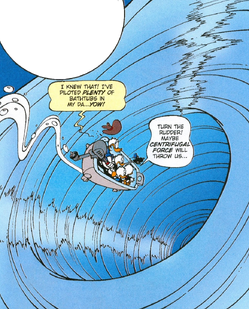 A spinning “Time Pool” inside the Vortex pulls in our heroes! (The Bathtub at the End of the Universe)

Gliding horizontally against the walls of the Vortex, the time travelers observe colored pools of "time-stuff" corresponding to various historical periods. (The Bathtub at the End of the Universe) 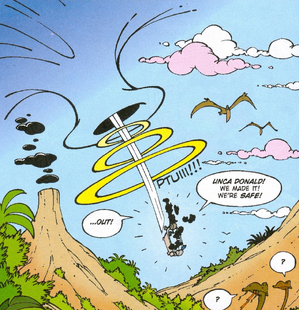 Exiting the Time Vortex back into the real world, in the Jurassic Period. Note "escaping" golden rings. (The Bathtub at the End of the Universe) 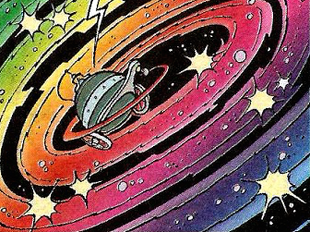 Mickey Mouse and Donald Duck fly the Time Coupe through a Time Vortex of shimmering colors. ('Tis No Season) 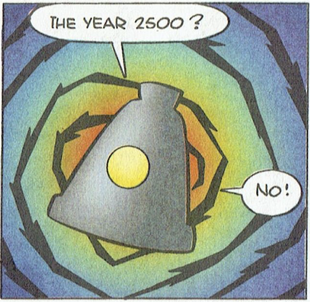 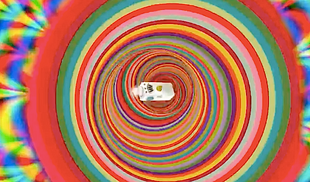 The Von Drake Time Pod travels through a kaleidoscopic, rainbow-colored version of the Time Vortex. (Outta Time)
Add a photo to this gallery

Parallel Universes each have their own Time Vortex. However, the parallel Vortexes are connected to the prime one; for example, the Doctor's TARDIS is famously attuned to his universe's Time Vortex,[12] but has often demonstrated the ability to jump into other ones, notably rescuing Batman, Wyldstyle and Gandalf from one on one occasion.[13]

The name of "time vortex" has occasionally been applied to smaller structures, akin to temporally- rather than spatially-displacing Space Warps, such as one created by Bill Cipher while he was stuck in the Nightmare Realm.[14] It is unclear what, if any, connection these phenomena have to the wider Time Vortex.

The Time Vortex was first seen in the 1966 story Og's Iron Bed.

Retrieved from "https://scrooge-mcduck.fandom.com/wiki/Time_Vortex?oldid=38922"
Community content is available under CC-BY-SA unless otherwise noted.