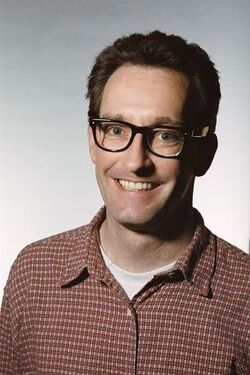 He is especially known for his long-running-role as SpongeBob SquarePants in the series of the same name, as well as the live-action character Patchy the Pirate, Gary the Snail and the French narrator based on Jacques Cousteau. He reprised most of the roles for The SpongeBob SquarePants Movie. He is also the narrator of Cartoon Network's The Powerpuff Girls. Aside from voice acting, Kenny starred in the short-lived Fox sketch show The Edge and was a cast member of the HBO sketch comedy program Mr. Show, where he worked with his wife, Jill Talley. He also voiced TJ Botsford and Dr. Two Brains from WordGirl.

After voicing schoolteacher Mr Willersteen in Meet the Robinsons, Tom Kenny has become the regular voice of Rabbit in Winnie the Pooh media, replacing Ken Sansom or Will Ryan (though Rabbit is voiced by Peter Capaldi in his most recent appearance, Christopher Robin, Kenny remains his main voice). In DuckTales 2017, he voices the show's version of Fethry Duck. He also voiced Ezra the Hitchhiking Ghost in the non-canonical Kinect Disneyland Adventures video game and the promotional short Haunted Mansion Cutscenes.