Be Leery of Lake Eerie

During an outing on Lake Eerie in 1972, a troop of Junior Woodchucks led by Philodemus Gentlefogg (and including Huey, Dewey and Louie Duck) encountered a humongous creature who seemed to have aggregated out of the waste of Lake Eerie, with skin like plastic bags (it is unknown whether it was another mutant similar to the Motor Sludge Catfish or an entirely new lifeform that evolved in the muck).

Soon nicknamed “Trashivore the Dragon”, the friendly monster ate and digested garbage, allowing him to act as a sort of waste-disposal for Lake Eerie. Trashivore, whose insides appeared to mostly be made of gas, had the ability to belch out this gas to collapse back into a puddle of sludge, only to rematerialized elsewhere and elsewhen.

Over this period, Trashivore became greatly beloved of the Duckburgers; although he suffered an attack from monster hunter Magnum P. Highpower, he proved impervious to bullet, which he just absorbed like any other "waste". However, he was not to last; when heavy rain diluted the pollution in Lake Eerie, Trashivore, who could not survive in such a relatively pure environment, dissolved into a puddle one last time and was never seen again.

Trashivore the Dragon first appeared in the 1972 Be Leery of Lake Eerie, reappearing (each time with a different design, with its variety further compounded by the various colorings) in the story's remakes. 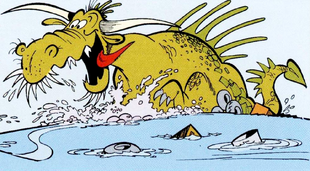 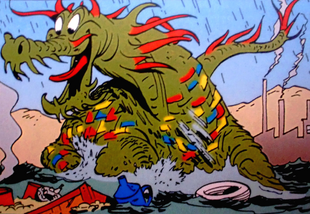