Treasure of the Found Lamp

Treasure of the Found Lamp is the ninth episode of Season 2 of DuckTales 2017, a television cartoon episode. It features the 2017 Continuum versions of Scrooge McDuck, Huey Duck, Dewey Duck, Webby Vanderquack, Selene, Ma Beagle and her Boys, Gladstone Gander, Charybdis, Johnny and Randy Empire and, in their debuts, the First Genie, his wife and D'jinn. Zeus, Hades and Apollo are mentioned.

Treasure of the Found Lamp debuted on May the 7th, 2019. Its title (and elements of its storyline) are based on the theatrical DuckTales film, Treasure of the Lost Lamp. 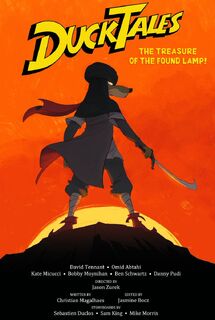 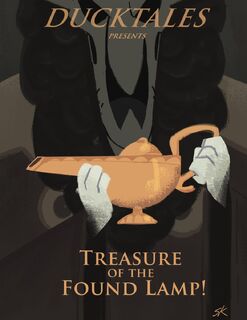 Alternate poster.
Add a photo to this gallery
Retrieved from "https://scrooge-mcduck.fandom.com/wiki/Treasure_of_the_Found_Lamp?oldid=38248"
Community content is available under CC-BY-SA unless otherwise noted.